Within a few years of her debut, Billie Eilish, has quickly become a global phenomenon, with Justin Bieber, Ariana Grande, Sam Smith, Drake and others among her fans. At the 2020 Grammy Awards, Billie Eilish became the youngest person ever to win four awards. We have to say that such a good superstar!

Billie Eilish's hit songs on Spotify, like Bad Guy, Bury a Friend,Wish You Were Gay,When the Party's Over, had successively achieved considerable music playback amount. Moreover, some of her legions of fans are eager to download these songs into their offline autio players like phone, iPod, Sony Walkman and etc. While there is an embarrasing situation, that Spotify only allows paid subscriber to download songs offline, and play these songs only within Spotify application. If you cancel your subscription from Spotify, you are no more able to listen to them offline. What's worse, the longer your subscription durability is, the more you should pay for Spotify service! 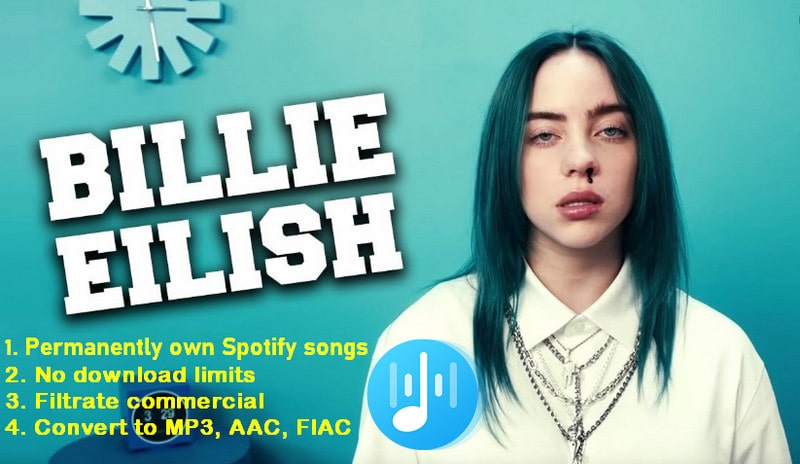 So the best way is to find a ultimate way to download Spotify songs offline locally on your storage like PC. Take TuneCable Spotify Music Downloader to fix this problem at a time. This magical tool enables you to download Spotify songs into your PC, no limit to your subscription level ( free or premium). It means that you can permanently own Billie Eilish's hit songs on your devices. You can work at the downloaded music like a phone ringtone, video background.

Whether you are loyal or not, you may wish to listen to the following "Billie-specific" songs and learn about her from the message in the melody. And by listening to these songs, you can know more about Billie Eilish. Listen them all free on Spotify.

Bad Guy :Released in 2019. Upon its release, Bad Guy received huge success, reaching number one on the US Billboard Hot 100. This song is as well named bestselling global digital single of 2019.

Ocean Eyes: "Ocean Eyes" is the debut song from then 13-year-old Billie Eilish. She posted the song on SoundCloud where it organically went viral, generating over a million plays. The song has been officially remixed four times, featured in the extended play.

You Should See Me in A Crown: Another standalone single from 2018, it picks up where the brooding 'Copycat' left off – with her unparalleled self-belief showing no sign of disappearing. The melody of a swampy hip-hop beat simmers in the Planet Earth background.

COPYCAT: Release in 2017."Call me cocky, watch your tone/You better love me, 'cause you're just a clone," she commands on opening track of debut EP, 'Don't Smile At Me'. We all did love this song's impossibly bolshy swagger, scattered beats!

Bury A Friend: Release in 2019."Bury a Friend" is a track in which the subject of the song revolves back to Billie Eilish herself. In other words, the lyrics are sung from the perspective of another entity, specifically "the monster under" Billie's bed. 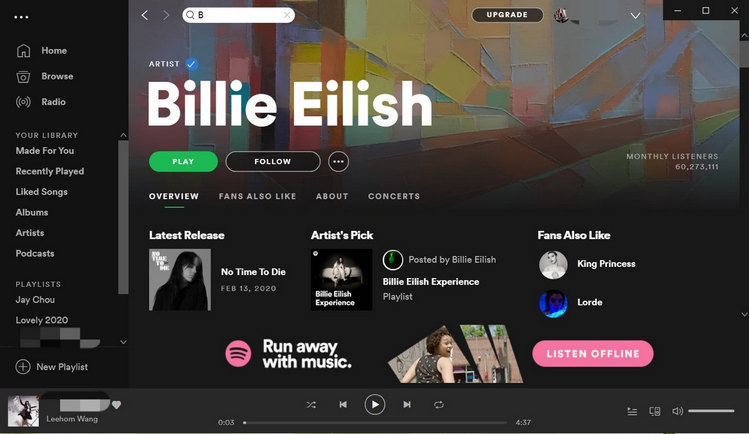 Why and What is Spotify Music Downloader?

Now, you can stream Billie Eilish's songs on YouTube channel, App Store, Spotify, Amazon Music or other streaming music platforms. If you want to always keep Billie Eilish's Songs playable on Spotify, the most direct route is to be a paying subscriber. Or you can be a visitor to enjoy a free Spotify service supported by advertising. Spotify offers new comer a 30 days free premium, but streaming a songs is not the same owning it. So this is not considered for long.

By contract, we have proved a compelling alternative---TuneCable Spotify Music Downloader to free download Billie Eilish's top ranked songs offline from Spotify. And you are further likely to listen to Billie Eilish's newly released songs without commercial interruption.

How to Download Billie Eilish's Hit Songs and own them permanently ?

As you see, tap the

(Add) icon in the interface and toadd Billie Eilish's songs on Spotify to TuneCable. By copying the playlist into TuneCable, then TuneCable converter will automatically analyze and load the sources as target. You can add one song at a time by a drag-and-drop way. Or you can unpack a desired album playlist to add by copying and then pasting the sharing link.

Step 3: Set up the format of the conversion songs

On converting settings, cchoose which output format you want to download into. TuneCable Spotify Music Downloader offers MP3, AAC, FLAC, WAV formats for user. MP3 formatted audio can be played on any device, so if you are not sure, check for MP3 tunes for the output format. In addition, customize the folder path on the output folder line, which is going to store the downloaded songs.

Turn back to main interface, you now just tap on the Convert button to download your desired Billie Eilish's songs offline from Spotify. Given the requirement of conversion, you may probably not streaming music on Spotify until the process complete. 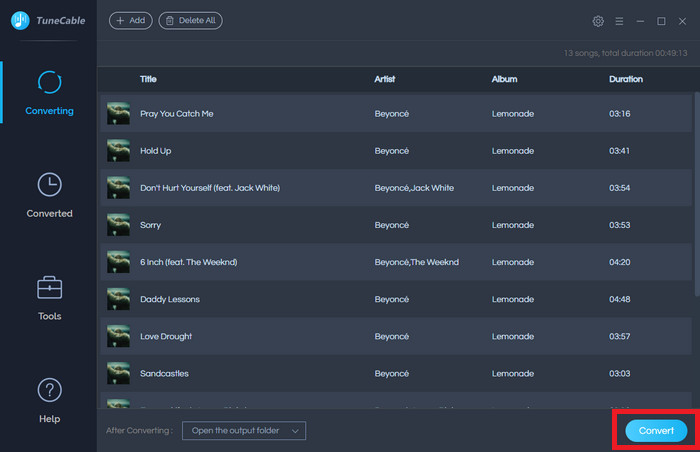 You can now go to Converted Nav to find out which songs have been downloaded. Visit your PC local path to pick up one of them to play on any computer music player. 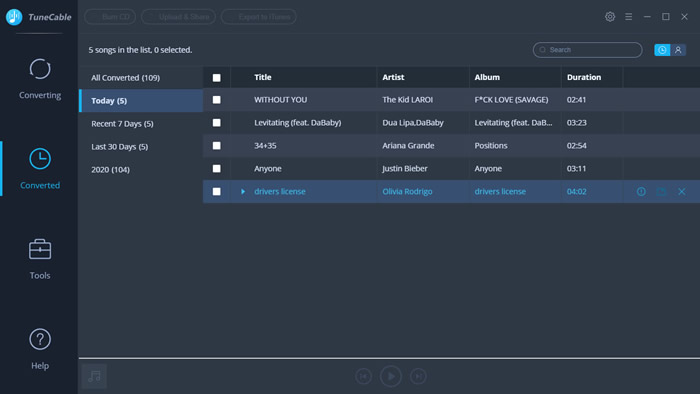 Reminder: For trial users, TuneCable only allows to convert the first 3 minutes of each song. To enjoy the complete Spotify music tracks for offline listening, please buy the full version!

Lots of Billie's hit songs are upcoming, you can just have one TuneCable Spotify Music Downloader to enjoy them seamlessly!

And if you wonder how to work more at Billie Eilish songs like a ringtone setting, transfer spotify music to a 3-party audio player, you can easily work out with Syncios Manager Free or Mobi-Transfer Free. Both programs are compatible with iOS and Android phones, so that you can better manage your converted songs in need.