The FIFA Qatar World Cup 2022 kicks off in November. People all over the world have been enlivened by this tournament. As the buzz starts to build for the tournament, the official soundtracks have been released.

And Billboard has compiled the ultimate playlist for soccer aficionados around the world, including Shakira’s Waka Waka (This Time For Africa) which has clocked 3,791,643,146 combined streams.

In the following content, we will learn about top-ranked hits for FIFA Qatar World Cup. Moreover, the best solution will be introduced to orient you to download Qatar World Cup hot songs as local MP3 files. After that, you can freely use the downloaded Spotify tracks, albums, and playlists with multiple programs and transfer them to any device for further use. 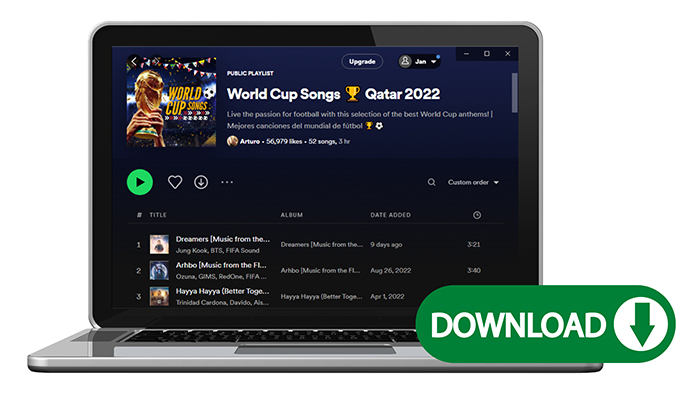 Wonder what the official soundtrack is for the FIFA World Cup 2022? There are 5 theme songs for the 2022 World Cup in Qatar, namely:

1. Hayya Hayya (Better Together) – "Hayya Hayya" is the first official single of the Qatar World Cup, released in April 2022. "Hayya Hayya" means "Better together" in English. It was jointly completed by American singer Trinidad Cardona, Nigerian singer Davido, and Qatari female singer Aisha. The rhythm of the song is light, and it sounds pleasant.

2. Arhbo – In August 2022, the new single "Welcome to Doha!" (Arhbo), the official soundtrack of the 2022 FIFA World Cup Qatar, was officially released. As the second single in the Qatar World Cup soundtrack, it will be fully launched on streaming media on August 26.

5. Tukoh Taka – On November 19, 2022, FIFA officially released the theme song "Tukoh Taka" for World Cup fans. The song is a collaboration between Nicki Minaj, Maluma, and Myriam Fares. The song will be the official theme song for fans, with lyrics in three languages: English, Spanish and Arabic.

The world football event held every four years has attracted the attention and love of people all over the world, and the highest honor is to enter the World Cup. And how could such a grand event be complete without wonderful music? Music is a big part of fueling passion and enthusiasm in people. Each time, the major streaming media platforms keep up with the popularity and sort out the rankings of the World Cup songs. This is very convenient for football fans, you can directly open the relevant music list and find all the songs about the World Cup.

Spotify equips exceptionally abundant music sources and has been a leader in the streaming music industry for many years. Naturally, it will not ignore such a high-profile tournament. For each World Cup, Spotify has compiled a series of World Cup music recommendations. Naturally, you can easily find all the trending hits about the World Cup on Spotify. For example, this list of "World Cup Songs, Qatar 2022" includes all the top songs.

It's not such a secret that upgrading to Spotify Premium enables offline playback. But you are limited to listening to the downloaded songs within the Spotify app. In fact, there is not much difference between listening to songs online and downloading them offline. You can even sign up for a Spotify Free account if you don't mind annoying ads.

Therefore, we turn to a professional tool - TuneCable Spotify Music Downloader. This program completely removes the restrictions of the downloaded Spotify songs and meets your requirements in all aspects. It downloads music from Spotify and easily converts them to unencrypted popular formats for extensive compatibility. The title, album, artist, and other tags of each song are fully preserved after the conversion for a better offline playback experience. You can avail yourself of full control over all preferred World Cup Music tracks and playlists via this magical tool.

Both the Windows and Mac versions of TuneCable Spotify Music Downloader are available. Choose the right version to download on your PC. When the installation is completed, launch this program. If you've installed the Spotify app in advance, it will pop up. We need to add songs from the Spotify app to download. 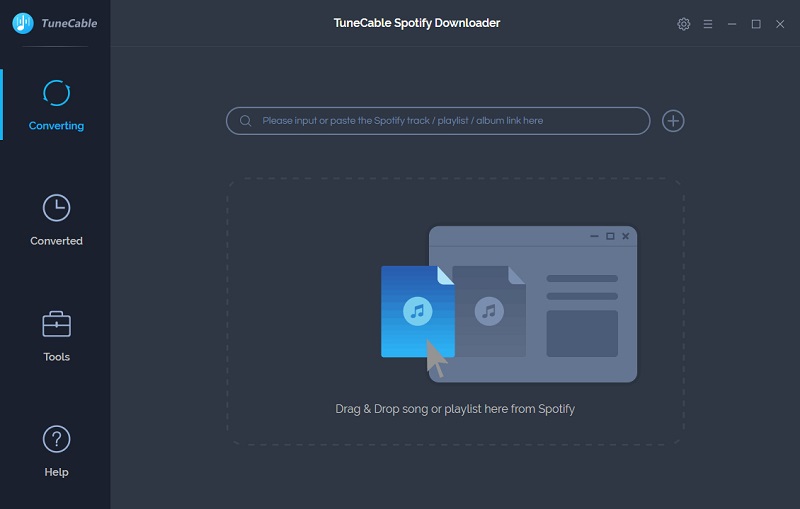 Another option to add songs to download is to right-click the song, album, or playlist, and then choose "Share". Choose to copy its link then paste the link into the TuneCable search box.

TuneCable will load all songs by parsing the link soon after, clicking "OK" after making a selection of desired tracks. 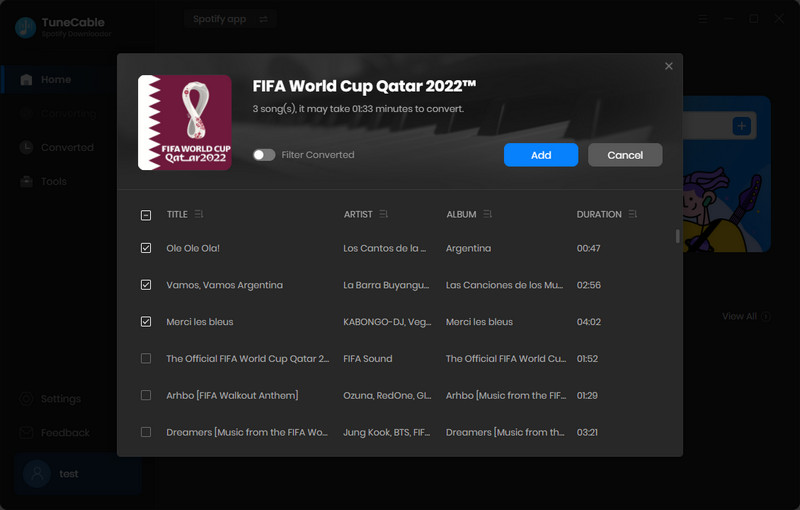 Step 3 Set Up the Output Settings

The preceding change to the output settings is necessary. In the top right corner of TuneCable, tap on the "Settings" icon. A pop-up window appears where you are allowed to customize the settings at will.

To download songs in MP3 formats, choose "MP3" in the "Output Format" setting and choose "320kbps" in the "Bit Rate" setting. Change the saving path and decide the way you need to organize the converted songs. For instance, choose "Playlist" in the "Output Organized" setting, and you can store songs by playlist. After finishing all settings, simply close the setting window to apply all changes. 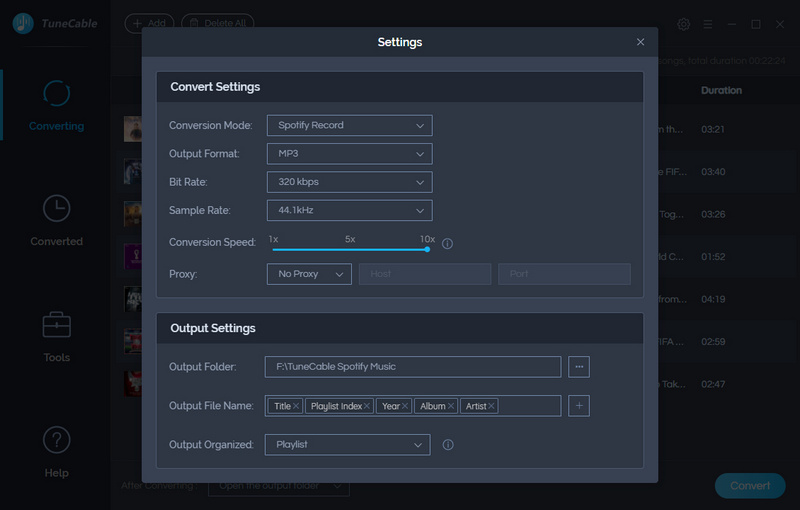 In the upper left corner, you'll find two more options, "+Add" and "Delete All". Users who tend to add more songs to convert in one choose the former, while those who want to delete all added tracks and redo choose the latter. Also, you can delete unwanted tracks manually one by one.

Once you make up your mind, you can go to the "Convert" button and execute the conversion at the moment.

The converted songs can be your possessions permanently. You can share them with your friends and family, burn them to CDs, set them as ringtones, add them to videos as BGM, etc. Enjoy the free offline playback now! 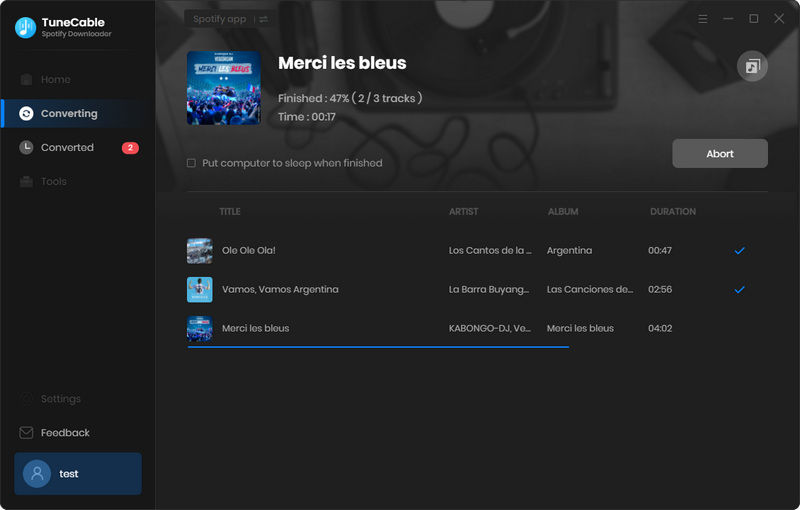 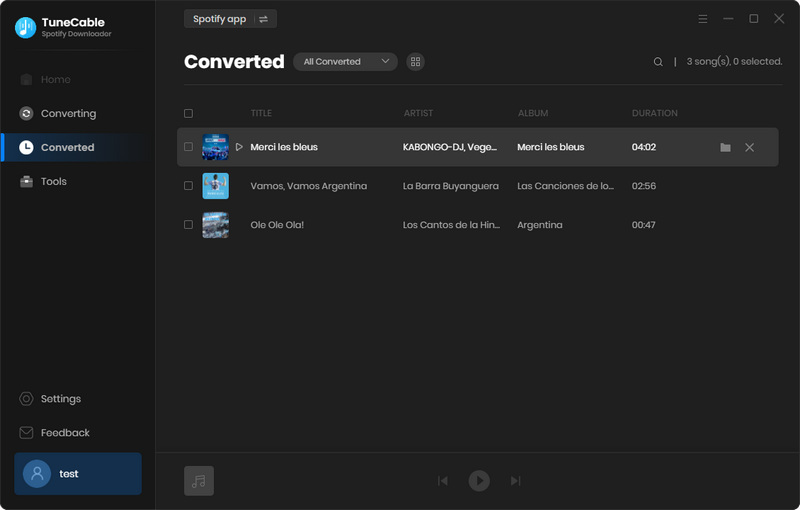 You May Also Need to Know:

The above text illustrates the hot recommendations of Qatar World Cup Music tracks and playlists and shows the detailed steps to make these Qatar World Cup music your private processions. All you need to do is to download and install this TuneCable Spotify Music Downloader to make it come true. Having a free trial is the best way to prove everything. Let's get started!