“I subscribe to Apple Music service for one month trial - now I want to quit but I don't want to lose any of my tracks. Is there any effective way I can download Apple Music to MP3, thus permanently saving them for offline listening on my computer?”

Among the top three music streaming services in the world, Apple Music has the largest music database – up to 90 million songs, and for the counterpart of its competitors – Spotify Music now can play 82 million songs and Amazon Music 75 million. With a large amount of iPhone users in the world, Apple Music, as an in-built app, also attracts a sea of subscribers. Regarding its service, users always have a positive comment – the high audio quality of music, a huge database of audiobook/songs/podcasts, etc., and most importantly, the one-month free trial for all new subscribers. And if you happen to buy a new audio device from Apple Store, you can even get up to a six-month free offer of Apple Music.

However, some of its users may have a special demand to download Apple Music/iTunes playlists to general formats like MP3. To stream songs from the iTunes library to other devices/apps, this move seems to be the only way. So if you are going to do this, you definitely need some help from a reliable music converter, and here we recommend TuneCable Apple Music Converter as your choice of priority – please refer to this whole review for more details. 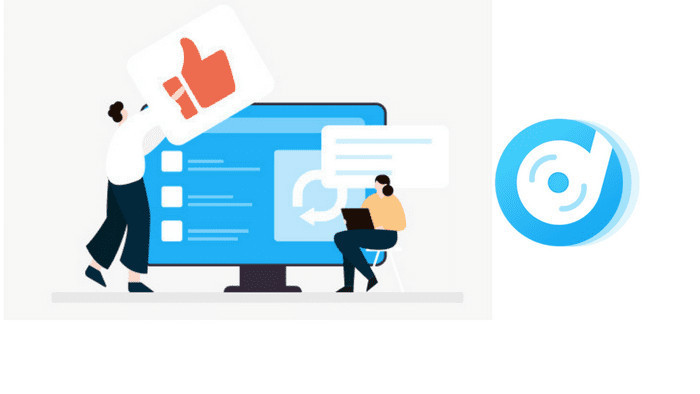 TuneCable Apple Music Converter is an amazing tool that can help you download Apple Music/iTunes MP4/audiobooks/podcasts to general formats – MP3/AAC/WAV/AIFF/FLAC/ALAC, and at the same time retain a whole set of ID3 tags and keep the original high audio quality.

Let’s take a look at some of its great features:

TuneCable Apple Music Converter supports up to nearly 50 tribes of languages. This feature not only signifies that TuneCable Inc. always holds the cultural variety as a company value, but also provides easier access to the software for non-English speakers.

TuneCable Apple Music Converter is user-friendly. For those who may not be computer-savvy, TuneCable enables them to know how to operate with the software immediately by taking a glance at its simple program interface. If you are still confused about how does TuneCable perfectly download Apple Music to MP3, you can simply refer to its YouTube channel - there will be enough tutorials for you to use Apple Music/iTunes playlists on various occasions.

TuneCable Apple Music Converter supports almost all common audio formats as its input/output resources. For users who have different demands, like playing Apple Music on other devices or using iTunes songs for DJ mixing, TuneCable must be the best choice to convert Apple Music/iTunes playlists.

To make sure that customers will not be bothered by the chaos of converted songs, TuneCable Apple Music Converter also offers an outstanding tags-saving function. Users can check in the settings and choose what tags to remain as they want.

TuneCable Apple Music Converter has a good taxon function of saving the converted songs to different folders/a single folder. Users can simply select “None” in the Output Organized section if they want all downloads to be saved in a single folder. While others may be more interested in saving the converted songs to different folders according to authors, albums, etc., they can also be satisfied with TuneCable.

The auto-renewal service is activated by default to save customers from the trouble of renewing manually, but TuneCable also offers a canceling link in the confirmation email – that customers can decide whether they are going to re-subscribe the service in another cycle or not. For acceptable circumstances, a time-limited money-back guarantee is promised by TuneCable Inc.

Trial Limit: For users who are using the free version, TuneCable can be used to convert the first three minutes of each song for free. To unlock its all features, please buy the full version >> Windows / Mac

The latest update is always available for users of TuneCable Apple Music Converter for free, and if you have any technical problems while using the program, you can contact TuneCable Customer Service for free support.

As TuneCable Apple Music Converter is simple to use, we believe you will immediately know how to register and operate the program via reading the full tutorial below. If you are still confused about some details, TuneCable technical support is always available!

Step 1 Download and launch TuneCable Apple Music Converter on your computer. The whole program interface will be shown like the screenshot below. 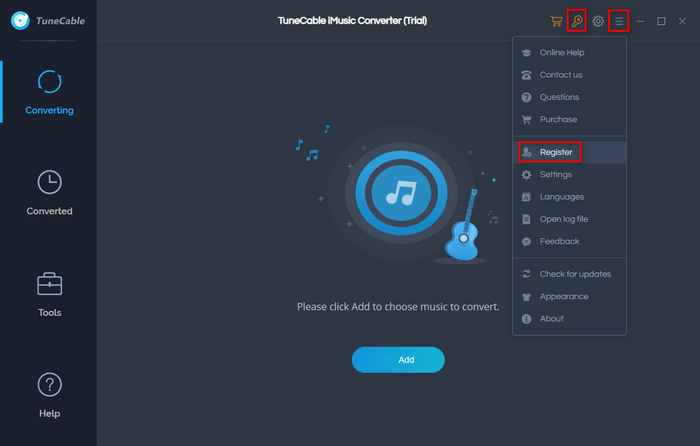 Step 2 Click 'Register' on the menu of the upper right corner, then you will be able to see the interface below. 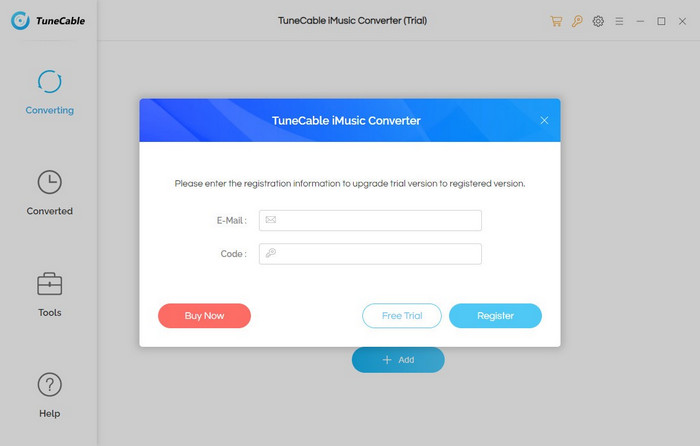 Step 3 Simply copy & paste the email account and activation code that TuneCable sent you in the confirmation email to finish the registration.

Note: The confirmation email will be sent to you within minutes after the purchase, if you do not receive it, please contact TuneCable for help.

Now, you will learn how to download iTunes playlists to MP3 format within 5 simple steps.

After registration, now you already have full access to the program. Please make sure that you've installed iTunes/Apple Music on your computer, and logged in to your account. Click 'Add', TuneCable will automatically load the whole playlists from iTunes/Apple Music. 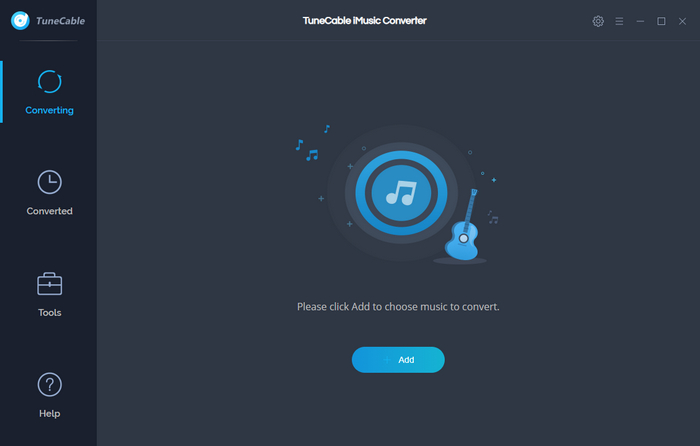 TuneCable Apple Music Converter supports converting audio files from iTunes/Apple Music/Podcast/Audiobook, so you can select the songs/podcasts/audiobooks that you want to download in this step. 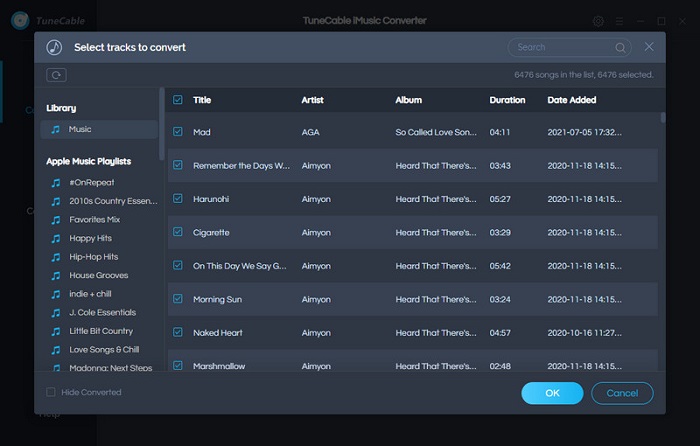 To customize the output settings of TuneCable Apple Music Converter, you can simply tap the 'Setting' icon next to the menu to open the window attached in the screenshot below. In the first part of this review, we have listed some features of TuneCable's settings - but now let's summarize them for another checking. 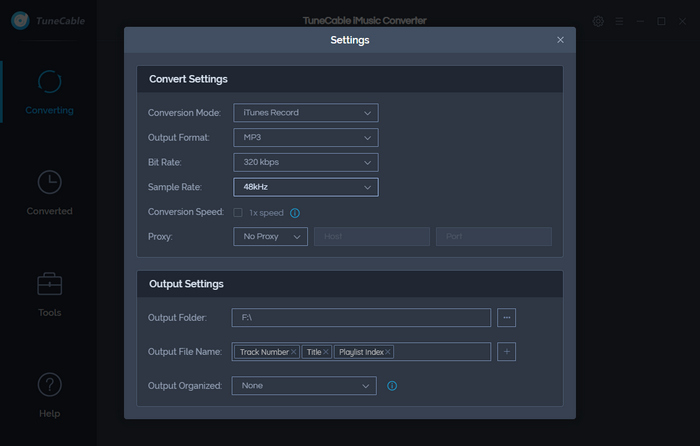 Click 'Convert', then TuneCable Apple Music Converter will start downloading Apple Music to your PC. The program supports up to 10X faster speed in conversion, so it won't take much time to finish the whole process. 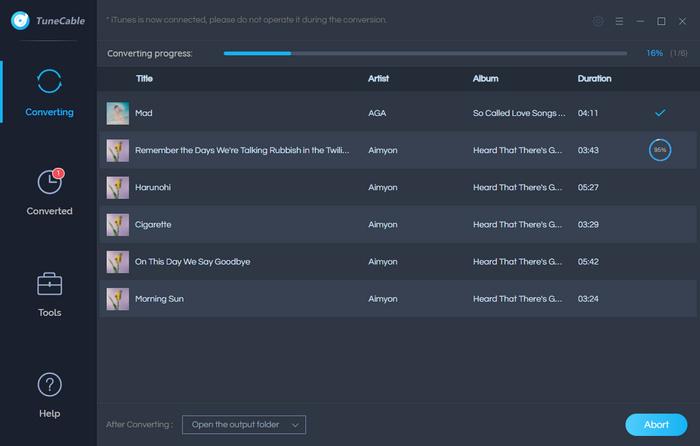 Once it has finished the whole conversion, you can navigate yourself to the 'Converted' section. Move your cursor close to the downloaded files, then a small folder icon will appear - you can directly locate the file by clicking it. 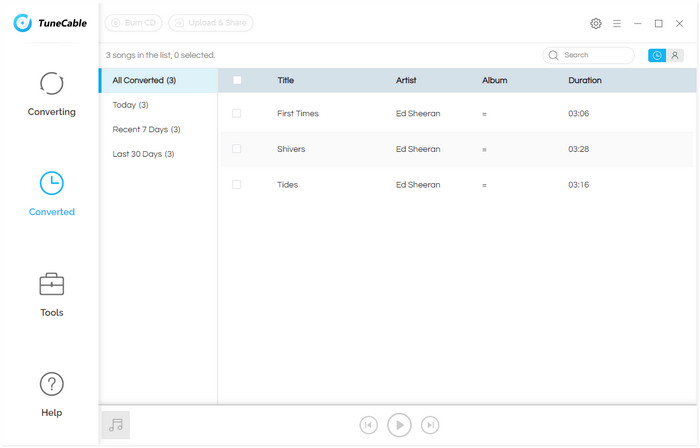 If you have extra needs, you can check in the 'Tool' section of TuneCable Apple Music Converter. Here, you can convert the audio files in plain formats to MP3/M4A/FLAC/WAV/OGG/AIFF formats by using Format Converter.

If you would like to burn a CD from iTunes/Apple Music or upload the downloaded files to OneDrive, TuneCable also offers two useful tools for you. You can even edit the tags and cover of the songs manually via TuneCable -- the 'Edit Tag' function enables you to do so. 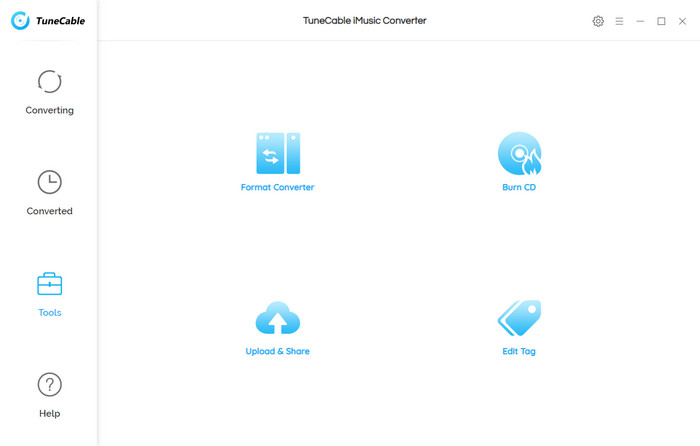 Conclusion: TuneCable Apple Music Converter must be one of the top choices when it comes to ranking the best Apple Music Converter. The program helps you download audio files from Apple Music/iTunes library/podcasts/audiobooks, and convert them to playable formats on other devices – with pristine audio quality and ID3 tags preserved.

After saving Apple Music on your PC/Mac, you can enjoy these songs/audiobooks/podcasts on your Windows/Mac without a membership with Apple Music. Also, you can transfer them to other devices for playing if you like. Try this powerful software in one click, and you’ll definitely be obsessed with it!